The advancement of Christ's Kingdom among Boys and the promotion of habits of Obedience, Reverence, Discipline, Self-Respect and all that tends towards a true Christian Manliness.

What is Boys' Brigade is all about? 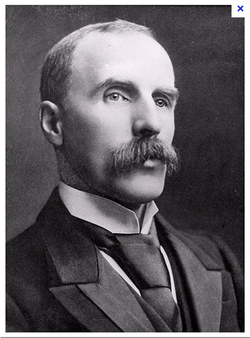 Sir William Smith 1854 – 1914 Started BB in 1883
The London Riots of August 2011 highlighted what many observers have been saying for a while, that the UK education system and society is failing in it's attempt to develop real men. Meanwhile the church in the UK appears to continue it's drive towards a female only congregation - the CofE recently releasing new stats that their split is 65:35 or virtually 2:1. Boys & young men continue to leave church in their droves.

Church and Society has similar issues with boys in the 1880's. One man had a vision to do something about it. Using his military training he established Boys' Brigade in 1883. The first uniform youth organization in the world which quickly grew into a  worldwide movement. In 1903 Smith led a parade of 12,000 BB young men past the Prince of Wales at Horse Guards Parade.

The spirit of what Smith set out to do lives on in the ministries of groups such as 'Wild at Heart' , 'Men for church' , 'Christian Vision for Men' and BBC's Gareth Malone's 'School for Boys'- but there has been no better explanation as to the problem that men and boys face in Church, and how to address this issue, then what Smith wrote in 1888- see below.

The current 2nd Reading Company - at Wycliffe Baptist Church - are proud to stand on the shoulders of this giant of the Christian faith, and humbled at the size of the task to turn Smith's vision into reality in Reading today.

“Christ is the ideal Man; Christ was the ideal boy; and if men and boys are not won for Christ there is
surely something wrong in the way in which we present Him to them. It may be we have gone too much on
the lines of seeking to commend Christianity to them by showing the boy only the side of it that would
commend it to the gentler nature of the girl. All a boy’s aspirations are towards manliness, however
mistaken his ideas may be as to what true manliness means. Our boys are full of earnest desire to be brave,
true men, and if we want to make them brave, true Christian men we must direct this desire into the right
channel, and show them that in the service of Christ they will find the truest, bravest life that a man can live.

We laid the foundation of the B.B. on this idea, and determined to win the boys for Christ by presenting to
them a view of Christianity to which we know their natures will most readily respond. It also seemed to us
that by associating Christianity with all that is most noble and manly in a boy’s eyes, we might do much to
disabuse his mind of the idea that there is anything weak or effeminate about Christianity – an idea that is
far too widespread among boys. Our aim was to band the boys together and create an esprit de corps that
would make them proud of their company, jealous of its honour, ashamed to do anything to disgrace it, and
prepared to make any sacrifice rather than be dismissed from it. In the Brigade we try to realise not only
that boys will be boys, but that boys ought to be boys, and it would be a thousand pities if they were
anything else.

Through games, camps, club-rooms, ambulances, bands, and so on, we take the boy on every side of his
nature, and surround him with a continual influence for good at that critical period of his life when his
character is taking a mould that will affect his whole future. The Brigade gives the officer endless
opportunities of coming into contact with his boys; and there is no better way of doing this than to ask them
to spend an evening at his home – six or eight at a time – when the touch between the boys themselves gets
very close, and they are drawn together as in no other way.

“The Brigade makes a point of acknowledging God in everything, of putting Christ at the head of
everything, and tries to do it in such a way that a boy will feel that the religious element in the work is a
pleasure and not a bore. It breaks down the notion in a boy’s mind that religion is a thing for Sunday and
Sunday School, and has nothing to do with his daily life during the rest of the week. We try to make him
feel that there is no part of his life that is beyond the range of God’s love, and that everything he does
should be done in God’s sight.”

This may sound like Boys Brigade is an out of date organisation - see the next tab for how BB adds value today....