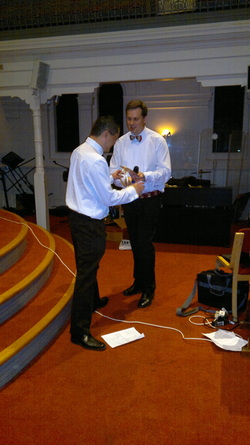 
Bernie won two awards in the evening although Jeff himself won an award although with mixed feellngs. He had set his heart on an award Politically incorrect award for which he had been favorite, with indeed three nominations. The award presented to Richard Standing for his "Fat Cow" fopa.

Other winners on Saturday night included Amber Brown, Chris Rock,Megan Lewis, Adam White In all, 11 awards were presented at the Kings Room in Wycliffe at an event attended by the company president Ray Hearn. The surprise of the night was Patrick McElligot  who picked up am award for a significant medicinal moment at survival camp.

The Captain, Mike Croall who has been with Company since 1985 worked with such boys as Matt Hearn, Richard Fairbairn Mark Deacon and Colin Holmes, awarded his Captains Cup to Jeff Lewis for all the hard work he has done, while re -iterating BB leadership has been and always will be a Team affair. This was after delighting the audience with his legendary  "Joan of Arc"  joke
There was also an outstanding round of applause for Mark Hewitt, and his helpers
The highlight of the evening was Stuart Short's speech paying tribute to Boys brigade  on the eve of his baptism , telling how Boys Brigade had helped him get a  "second chance" with God.   More pictures can be found in the "Events - Gala Evening"